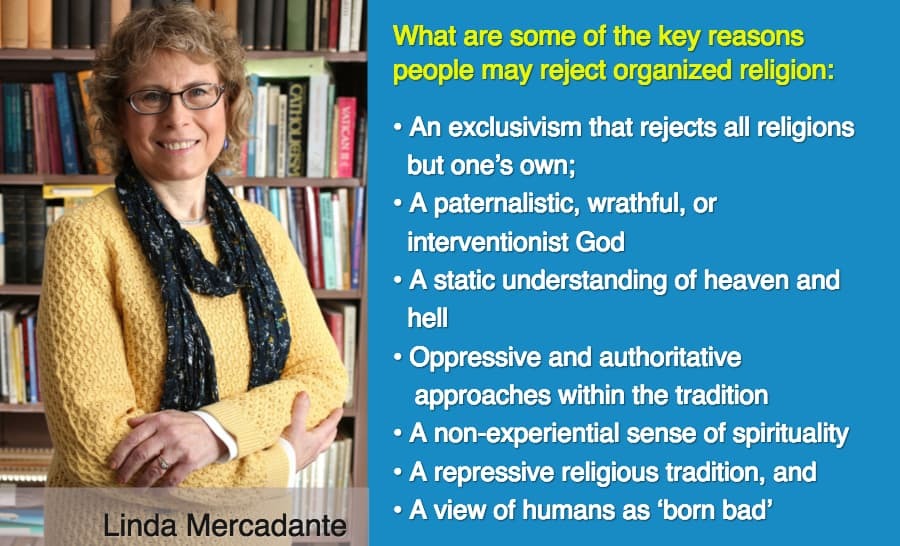 This is the second in a three part series on the rise of Spiritual but Not Religious or SBNR.

I spent some time describing the work of Linda Mercadante in her book Belief Without Borders. She provided a model for her study groups based on age groupings and personality types.

I want to talk in general terms why people either have left the church or those who have never been in church have joined the ranks of SBNRs.

Theology is ‘faith seeking understanding’. Mercadante’s research found that her subjects were engaged in this process as they found themselves engaged in asking where they stood in relation to the Ultimate. As we will see in a moment they have challenged much of the orthodoxy of organized religion. Perhaps there theology is not as consistent and comprehensive as Christian doctrines and creeds. However, in a post-modern society SBNR thinking is closer to mainstream society.

What are some of the key reasons people may reject organized religion:

Interestingly, most SBNRs will lump many religious traditions into the same mix. There is no discerning if a denomination differentiates on any of these factors. Most SBNRs have an ill-informed understanding of the doctrines and beliefs of denominations.

We could simply say that they are ignorant of who we are as Anglicans so why should we bother? As former Archbishop Rowan Williams stated:

“… one of the most significant lessons to be learned from the great shift towards post-religious sensibility is how deeply the coercive and impersonal ethos of a good deal of traditional religion has alienated the culture at large.”

Mercadante’s study found that most defined one’s nature as being the development of personal well-being, to improve one’s life, and promote wellness. The standards by which they measure personal well-being are things like happiness, well-being, or comfort. At the core of any assessment is that human nature is inherently good.

SBNRs struggled with defining good and evil largely because they have no standard by which to judge it (which a religion gives you). Some would avoid making any reference to their having to be a standard.